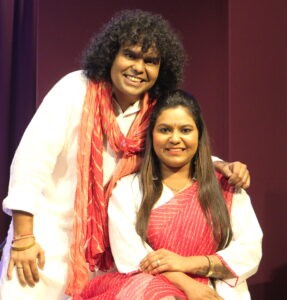 Tabla Wizard PanditChaturLal Memorial Society celebrated the 16th year of the Mumbai Chapter of Smritiyaan concert series. Broadcasted Live from the stage, the series theme was ‘KhammaGhani’, a conversation of traditions. The event was streamlined on their official social media accounts.

The Smritiyaan Mumbai chapter, a musical tribute to Oscar Nominee & BAFTA Award winner PanditChaturLal was organized with the hope to surpass the difficult times of Covid and relive the same old life with prosperity and happiness. Hence the beautiful concept ‘KhammaGhani’, a Rajasthani phrase meaning pass on the good wishes was decided upon for this year. A salutation to all good things welcoming happiness in everybody’s life by drawing upon age-old Indian traditions. The concert series was also dedicated to Shri Sushil Chandra Tripathi whom we lost in a fight to covid. 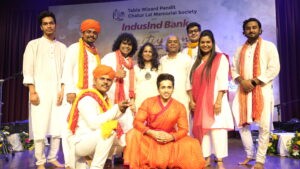 Smritiyaan’s production KhammaGhani featured Kathak Maestro Kumar Sharma, percussion by PranshuChaturLal, Rajasthani folk vocals by Sarai Khan, Dholak by Latif Khan accompanied by JanaabMudassir Khan on sarangi, vocals by Jay Dadhich, and keyboards by Shivam Kumar Malhotra. The evening commenced with a lamp lighting ceremony by CharanjitChaturLal along with all the other performing artists of the evening. Later, the event started with a soulful Rajasthani folk ensemble by Sawai Khan &Latif Khan. During their mellifluous Rajasthani folk performance, Sawai&Latif Khan showcased their multi-talented skills in music leaving the audience mesmerized. This was followed by a Kathak performance by Kumar Sharma who himself is a celebrated artist. He was also joined by PranshuChaturLal who is known for his mastery on tabla but in this production he was seen with an exquisite percussion ensemble giving a different flavor to it.

Kumar and Pranshu joined other talented artists commencing their performance with Shri Vishnu Stuti showcasing Dashavtar followed by famous folk songs Hichki and BalamJi Mara. This act was curated with a distinctive look by retaining the real essence of the song. The evening was highlighted with the much-awaited Jugalbandi coming to an unimaginable crescendo. Later, Kumar Sharma presented a most cherished Bollywood classic ‘Aaj Jaane Ki Zidd Na Karo’ in his melodious voice. The evening saw a beautiful conversation of traditions making it a perfect rejuvenating treat for ears, eyes, and soul.

The Smritiyaan concert series is being organized annually as an attempt to revive the memories, the art of the Legend PanditChaturLal who was the first Indian artist to introduce the Jugalbandi of eastern and western music in the year 1957 with the King of drum Papa Jo Jones. Oscar-Nominated & BAFTA Award Winner Tabla maestro PanditChaturLal was the first internationally acclaimed Indian Percussionist who popularised the Tabla among western audiences. He was one of the notable artists to promote and create a grand acceptance of Indian classical music to the West in the mid-’50s giving concerts of Indian Classical music. As a tribute and in the memory of the Tabla wizard, Pandit ChaturLal Memorial Society was established in 1990 under the patronage of PanditCharanjitChaturLal&MeetaChaturLal. As a parent umbrella, many events have been organized to promote Indian and global music for the past 32 years.

The KhammaGhani production has been curated by the legend PanditChaturLal’s grandchildren – Prince of TablaPranshuChaturLal and Shruti ChaturLal Sharma who is also the Artistic Director at PanditChaturlal Festival.

With all the excitement, the artists shared their experiences. The Kathak artist Kumar Sharma said, “It was a lovely involvement & understanding. It was a moment of celebration of slowly coming back to normal after a dark phase. We all had never met before, but this production got us together and I am so glad. The most amazing part of the production is that we all inspired each other which is so much visible in KhammaGhani. We literally spent 9 hours working on this, where actually three of our fellow musicians joined us on the stage itself.  I must say KhammaGhani could not be more organic & natural than this.” Adding to this, Dholak maestro Latif Khan, said, “I really loved working on this production. We had a theme, an emotion in mind and could relate to it’s real state & listening to so much around. We wanted to motivate , bring happiness and look at life with a positive attitude and welcome the coming times with gratitude and greet it by saying ‘KhammaGhani’”. Even the multi-talented Sawai Khan couldn’t stop but praised the production saying, “With this production, we all were very mentally fascinated & completely invested in all different levels. It was a mystical experience.”

Speaking about the success of the concert series, PranshuChaturLal percussionist and also the conceptualiser, said “I believed moments spent together with KhammaGhani were elating for all of us. It is a very happy production. It has its many folds – so many different artists, different traditions & genres making it very technical, so much improvisations & most beautiful an amalgamation of thoughts coming together making it more musical resulting in living it has a real moment. And I must say an avalanche of appreciation has made it much more special. this journey was not a conscious one, it was just happening on its own as it meant to be.”

Adding to this, Shruti ChaturLal Sharma, said, “The pandemic has been quite a challenge, but the positive aspect was to cope-up, learn its new aspects and bounce back with a brighter shining light. And somewhere deep inside my heart I feel blessed and thrilled to share KhammaGhani, an incredible production through the medium of PanditChaturLal Festival. The most noteworthy part is that we had so many artists on board from different states which was quite a huge task which also called on for both a musical as well as a mental sync, which was possible only this way. Another huge thought was to live up with the authentic side to its true meaning, and further experiment bringing together the spot-on essence of folk, Kathak& percussion. And I am glad we all reacted to the concept & it’s thought process quite instinctively & emotionally giving KhammaGhani its own textures and flavours which makes it giving it its own kind of expression of amazement.”

What are the top benefits of virtual offices?

what is fate series?

This Valentines, Apeksha Films & Music. Brings to You a Special Song to Express Your Love

What Are The Long-term Side Effects Of Cancer?