Pertaining to a severe accident in 2015, Sepoy clerk, Mr. Sudhir, lost his body sensation, bowel and bladder control. He was successfully treated with hESC therapy at Nutech Mediworld and rejoins his camp after 4 years of bed rest.

While travelling for a family function, the patient met with an accident that left him bed ridden with restricted body movements. Upon various consultations at Civil Hospital and Military hospitals, he was consigned to a wheelchair, with no bowel and bladder function as well. Following a 3 months bed rest, he was then referred to a hospital in Pune where he underwent 3 years of rehabilitative therapy, but in vain. He was then advised to undergo a spinal decompression surgery, that helped him regain some sensation above the knee until the hip, but had no bladder and bowel sensation.

Followed by another accident, he was then detained from the army camp due to invalid Medical board certificate. Though he had lost all hopes of joining back the Indian Army, his father (poor farmer) tried to keep his morale high. While in incessant search for a better treatment, he came across hESC therapy and opted for it. The desire to become better was again ignited and he scheduled a consultation with Dr Geeta Shroff. 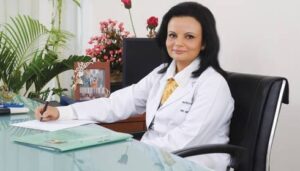 “The patient regained sensation in both his legs, thighs and hips,  immediately after the completion of first session of the therapy which lasted for 3 weeks. After the 3 sessions of the treatment, the patient had regained mild sensation in his bladder and bowel functions. With support he is able to walk for upto half an hour and also feels confident to regain better quality of life soon.” Said Dr Geeta Shroff, Director-Nutech Mediworld, New Delhi.

SCI is a challenging neurological injury and is associated with permanent disability and decreased life expectancy. The complex series of pathological events involved in SCI result in long-lasting locomotor and sensory neuron degeneration below the injury. There have been several strategies to improve neurological recovery, such as surgical intervention, physiotherapy, and pharmacological interventions, but none of these have proven to be effective.

“Spinal cord injury is one of the several incurable conditions that can be treated with this therapy. Many patients suffering from various lifestyles, congenital and other ailments like diabetes, cerebral palsy, parkinson’s disease, cardiac conditions etc have been successfully treated through this cell based technology.” She added

Research done by Dr Geeta Shroff on Stem cell transplantation proves to be a promising technology that has the potential to replace damaged neurons, reestablish lost axonal connections, and provide neuro-protective factors to allow for healing and recovery after SCI. Human embryonic stem cells (hESCs) play a vital role in treating neurological disorders and have a huge potential for differentiation and can provide neuronal or glial cells for transplantation.

Dr Geeta Shroff who has patents in over 90 countries across the world has treated over 2500 patients since 2002. She is also the winner of the “Woman Leader in Science Award”, and has over 50 publications in scientific and medical peer reviewed journals.