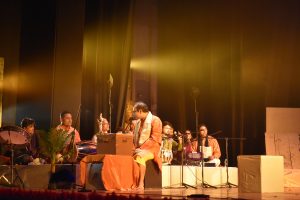 The 6-day long festival, being organized for the past 4 decades, showcase the works of eminent litterateurs with some promising contemporary writers and directors. On the first day of the festival, the audience saw the play ‘Seediyan’ written by Daya Prakash Sinha and was directed by Arvind Singh. 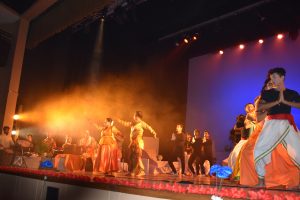 On the second day, musical play ‘Ram Ki Shakti Pooja’ was featured which was directed by Prathibha Singh. This poem was written by great poet Suryakant Tripathi Nirala in the year 1936 with the war background of famous Indian epic Ramayana. The poet Suryakant Tripathi Nirala was a poet, novelist, essayist and story-writer. The play begins with a war scene where the invincible Lord Rama is getting frustrated as his all-powerful war wining efforts are failing. He sees that Goddess Shakti is protecting Ravana who is worshiping her. On the suggestion of his chieftain, he prepares himself for the worship of Goddess Shakti and Hanuman brings 108 blue lotus (Neel Kamal) as offering to Goddess. Lord Rama starts his pray and when he was about to finish his worship, Goddess Shakti appears and hides away one of the blue lotus. When Rama finds that the last 108th blue lotus is missing he becomes upset. In the state of despair, he remembers that his mother used to call him Rajeevnayan and says that your eyes are blue lotus, my son.  With this Rama takes an arrow and decides to take out one of his eyes to offer the 108th blue lotus. At that time Goddess Shakti appears and holds his hand and announces his worship successful. She absorbed in Lord Ram and Ravana gets defeated.