Sahitya Kala Parishad organized another successful edition of Bhartendu Natya Utsav. The theatre festival is a tribute to the father of modern Hindi literature as well as Hindi theatre – Bharatendu Harishchandra. Bhartendu Natya Utsav is being celebrated for the past 4 decades that features some of the notable works of eminent litterateurs along with some promising contemporary writers and directors. Spread over 6 days, each day one play was featured.

On the first day of the festival, the audience saw the play ‘Seedhiyan’ written by Daya Prakash Sinha and was directed by Arvind Singh. The play is about the comparison to today’s time and the of the previous era like the Mughal rule. How people by hook or crook will try to climb up the ladder of success and reach the top. This was followed by a musical play ‘Ram Ki Shakti Pooja’ directed by Prathibha Singh and written by great poet Suryakant Tripathi Nirala. The play is against the war background of famous Indian epic Ramayana showcasing Lord Rama worshipping Goddess Shakti. 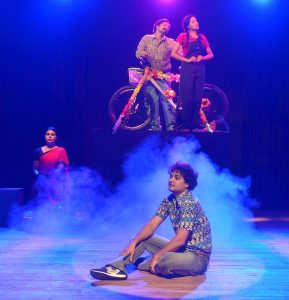 Shakespeare’s ‘A journey of Romeo Juliet’ was loved on the third day. The play directed by Manoj Kumar Tyagi features an actor, performing as Romeo, who doesn’t feel his character and instead of being a puppet in the hands of the director, he wants the freedom to make decisions on his own according to the criteria. The fourth day saw ‘Sheeshe ke khilone’ originally written by Tennessee Williams and directed by Govind Singh Yadav. An adaptation of the English play The Glass Menagerie, the scenes are drawn from the memories of the narrator Aejaz, a character in the play. On the fifth day, Vikram Singh written Ardhkaavya was featured and was directed by Kajal Soni. The play is a tale of broken identities which all the four entities bonded to each other in a family has to undergo in a spine-chilling subject they unfold on the stage. Through this play, presented by Robroo group, they unfold the grass-root cause for corruption and militancy. 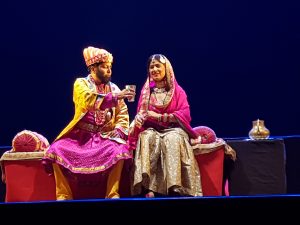 On the last of the festival, a comedy play ‘Prem Kabootar’ was presented written by Manav Kaul and directed by Sameep Singh. The play is the era of school days, those teenage love affairs, romance in the air. The story revolves around Saleem the tailor and a Casanova, Raju the chai wala and Suneel the Hindi film hero and villain both in his own self. All three are living the magical feel of love in their own way and then ultimately becoming Kabootar.

Manav Kaul is an Indian theatre director, playwright, actor and filmmaker. Amongst his notable plays are “Ilham”, “Park” and “Shakkar ke Panch Daane”. His play “Peele scooter Wala Aadmi” won him a META award for best script in 2006. Some of his popular films as an actor are Jajantaram Mamantaram, Kai Po Che, City Lights, Haider, Wajir, Jai Gangajal, Jolly LLB 2 and Tumhari Sullu. He was nominated at 63 rd Filmfare awards for best-supporting actor for his film “Tumhari Sullu”. ‘Prem Kabootar’ is one of the most interesting and hilarious presentations of one of the best stories by Manav Kaul which will keep you tickling throughout and let you live your own school days. 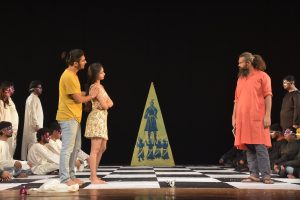 Sameep Singh is a 1995 National School of Drama graduate with the specification in acting. He has acted in almost 50 plays in different style and genre with eminent theatre directors. Sameep Singh has written and directed the play “Kafalpko Mail Ni Chkho” (Kumauni). His other directional works are Premchand’s “Eidgah”, Surendra Verma’s “Shakuntala Ki Angoothi”, UdayPrakash’s “Ram Sajeevanki Prem Katha”, Utpal Dutt’s “Teen ki Talwar”, to name a few. Besides these, he has also acted in almost 20 T.V serials and films like Gangajal, Kabhi Pass Kabhi Fail and system. He is currently working with Shri Ram Centre Repertory Company as Repertory chief.

Hon’ble Deputy Chief Minister, Manish Sisodia shared, “Looking at the works of these eminent writers and directors, I can proudly say that our country is a pool of talents. Not only the writers and the directors even the actors have a done commendable work. I congratulate the team of Sahitya Kala Parishad, all the artists who participated in this year’s Bhartendu Natya Utsav for putting up a great show. I thank the audience for showing their love and support to this festival and we hope to continue for years to come.”

Self Care Affirmations to Fall in Love with Yourself

Everyone wants to own the metaverse including Facebook ,  But what exactly is it?

What Are the Wholesome Benefits of Living the Christian Life?