Sign In / Register
Home » CBD Oil Tincture: What You Should Know
All

Since they first entered the market, CBD products have become a household name and nearly everyone has heard of it at least once. Nowadays, you can find it in nearly everything you think of, from lotions, chocolate, and pet products to even nail polish and toothpicks.

If you’re not a CBD consumer, you may be wondering why the chemical is so talked about these days. Well, the compound is growing in popularity because it offers many health benefits both for humans and pets as well.

There are so many ways by which the chemical can be consumed or administered. In fact, a survey in Cannabis and Cannabinoid Research was published in 2018 on the subject. Through the survey, it was discovered that there are over 4,000 methods of administration among about 2,200 users. Of these methods, the most common was sublingual consumption. Sublingual administration involves letting a few drops of the extract under the tongue either as a tincture, spray, or liquid. Visit https://theislandnow.com/ to find out more ways by which cannabidiol can be consumed.

In this article, we’ll delve into what CBD tinctures are and what you should know about them. But before we go into all that, for the benefit of those who don’t fully understand what CBD is, let’s go over it.

CBD is short for “cannabidiol”. It is one of about 100 cannabinoids that can be obtained naturally from the cannabis plant. It can be found in every other part of the plant except the seeds. Cannabidiol isn’t psychoactive as many people may think. This misconception is one of the main reasons why a lot of people are skeptical about the use of cannabidiol products.

The compound is often linked with marijuana, a plant that is known to have very strong psychoactive properties thanks to the heavy presence of delta-9-tetrahydrocannabinol (THC). THC is also a cannabinoid like CBD; however, it is extremely psychoactive while the latter isn’t. So, in clearer terms, tetrahydrocannabinol will get you “high” but cannabidiol won’t.

In the United States, most of the commercially sold cannabidiol comes from hemp. Hemp is a cousin of the marijuana plant, both of which are popular strains of the cannabis plant. Both hemp and marijuana contain CBD but in varying quantities, with hemp consisting of mostly CBD. Cannabidiol is mainly extracted from hemp because it contains more CBD than THC, the psychoactive cannabinoid we mentioned earlier. 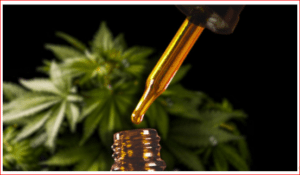 Tinctures generally refer to extracts that are put under the tongue. They are the product of herbs soaked in a liquid and are mostly stored in a glass bottle with a dropper. Tinctures have been in existence even before CBD became popular. Herbal tinctures have been made traditionally by soaking plants in alcohol for weeks.

For CBD, parts of the hemp plant like buds and flowers are steeped in alcohol to extract the chemical from the plant. This result is a highly concentrated solution which explains why CBD tinctures are so potent. Tinctures can also be made from other solvents including glycerin, plant-based oils, vinegar, and sometimes a mixture of alcohol and water.

Cannabidiol tinctures with oil carriers are often mistaken for CBD oil. This is understandable as they are often packaged the same way and their labeling doesn’t do much in differentiating the two. That said, there isn’t much of a difference between the two save for the method by which they are produced.

CBD oils are made using carbon dioxide to separate the chemical from the plant, while tinctures, as we’ve just seen are made by steeping the plant’s parts in a solvent. Another notable difference between the two would be their taste. Both taste funny in their raw state but tinctures in their finished state have flavors that mask the bitter taste, while oils are usually left as is.

Tinctures are most effective when they are kept under the tongue for between 90 seconds and two minutes. Swallowing it right away lets it go through the digestive tract and you’d have to wait longer before you can feel its effects.

But when it is kept under the tongue as we said, most of it is absorbed by the blood vessels in the mouth, causing it to work much faster. Its effect has also been found to last longer this way, with some users reporting feeling its effect for as long as eight hours. Its quick response time of between 15 and 60 minutes makes it ideal for acute conditions where quick relief is needed.

Tinctures are usually highly concentrated and so, only a few drops should be taken at a time.  Consumers are very likely to react to it differently. For some users, as few as three to five drops can have a strong effect, while others may need more than that to feel anything. If you’re just starting out, it is advised that you begin with about three drops and see how your body reacts to them. Click here to find out more.

Several studies and reports show that cannabidiol is a potent compound that can and has been helping to treat several illnesses. The most-reported illnesses include seizures, anxiety, pains, and inflammation among others. Many people use tinctures because unlike edibles like CBD cookies and gummies, it doesn’t contain sugar. There’s also some evidence that suggests that taking it along with a high-fat food may shorten how long it takes for its effects to kick in.

Although there’s still so much that remains unknown about the effects of this compound, initial findings are showing positive results. Some researchers even say that the use of the chemical in treating many other illnesses looks promising.