Arbind June 8, 2019
What happens when two people , who happen to be the master in their fields, come together for an event? 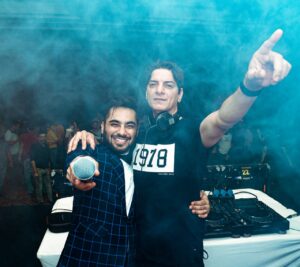 While Mohit Jadhwani is one of the best anchors in the country today, Ali Asgar is the King of Comedy playing the popular character of Dadi on ‘The Kapil Sharma Show’. They came together for a recently held event called ‘Bringing it Beyond’ organised by HDFC ERGO where the employees were rewarded for their excellence and valuable services to the company.
The event continued for two days with a melange of Bollywood celebrities like Ali Asgar, Rekha Bharadwaj, DJ Aqeel and VJ Bani making appearances and delivering memorable performances in front of the crowd.
For Mohit, the most memorable part was hosting the Afterparty with DJ Aqeel.
About the same, he says “I’ve grown up listening to DJ Aqeel’s music. I was 12 when he released his Remix of ‘Keh du tumhe’ and since then I’m his fan. Back in those days, I never thought I’ll grow up and perform with him one day. On Day 2, I hosted a Fun & Fitness session with VJ Bani, followed by a Cricket tournament which was won by Team SMASHERS that I was rooting for. Gaurav Sharma from the senior management was very supportive and was instrumental in making this event a huge success”.
The event was held at Ritz Carlton, Bangalore. Mohit has several more big ticket events lined up in future, the details of which he will reveal shortly.