Running in its 2nd Edition, the Festival was the biggest and proved yet again, the most popular Food Truck Festival in the Country.   With mouth watering and sumptuous Cuisines from across the Globe from more than 40 Food Truck Brands, over 30 F&B stalls, a Mega Bar & an exclusive Sheesha Lounge, coupled with interesting games,  fun activities and Live Music from some of the best singers & bands, Delhi Food Truck Festival was a fun filled Food & Musical extravaganza.

“Food Trucks, an innovative and cost effective way to launch your dream restaurant has taken up young entrepreneurs by storm. Already a rage in Delhi NCR, the business of Food Trucks is multiplying in other Metros as well.  To facilitate the young and promising Food Truck Entrepreneurs and give them a platform to showcase their F&B skills to the audience at large, Delhi Food Truck Festival was launched in April this year”, said the young entrepreneur Abhishek Deo, Founder and Festival Director at DFTF.

The first edition of the Delhi Food Truck Festival witnessed the wide acceptance and super success among the Delhi foodies and music lovers. While the  second edition, the Biggest Food Truck Festival in India, boasted of cuisines from American, Indian, Italian, and Chinese to beverages hot and cold.  “The response of the debut DFTF from all the stakeholders exceeded everyone’s  expectations and gave us the strength to give even better experience to the Delhi foodies this winter with the 2nd edition of DFTF”, added Abhishek.

“We worked hard to bring an enthralling experience to the audience with the best Food, Music and Fun. A lot of excitement was being thrown with an array of Competition and Games along with a plethora of celebrity Chefs &  Food Critics being invited to taste the delicacies and encourage the young Food Truckers”, said Pradeep Sharma, Director VMS Events

There were live performances by well known Singers & bands like Knox Artiste, The Project Raag, Zikr Band, DJ Basspatch & Bollywood Brothers. Delhi Food Truck Festival also gave the platform to young artists to showcase their talent to the Music Lovers of the City.

Some of the Food Truck Brands at the 2nd Edition of Delhi Food Truck Festival included : 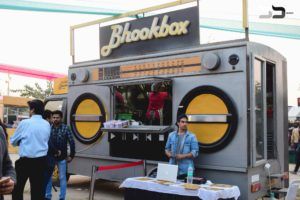 Toaster Troubles? The Best 4 Slice Toaster Is Here to Help!

Learn how to incorporate better eating habits into your daily routine.

Try these Delicious Samosas Recipes on the Grill this Diwali.