Pulses that people may be buying from a neighborhood market or a public distribution shop till the lockdown is on would most likely have come by freight trains from Ahmedabad. Shree Mahavir Impex Pvt Ltd has given the green signal to send 2100 metric tonnes of moong dal (green lentils) from Halvad, Sukhpur, from a freight train to Kerala. Under the scheme of Pradhan Mantri Garib Kalyan Anna Yojana, one kg will be distributed free of cost to needy families every month for three consecutive months. 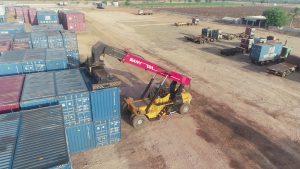 A nodal agency, Shree Mahavir Impex Pvt Ltd, has started an initiative to deliver free pulses across the country.  After cleaning, filtering, polishing, the lentils are sent to the artisans where they are being given double wages, and the trucks are also being given more incentives so that the goods can reach on time.

According to the MD of Shree Mahavir Impex Pvt Ltd, Mr. Viren Trivedi, “We are monitoring day and night to ensure that every state gets pulses as per requirement for the next three months and hence the supply is being provided as per the demand of the state. We hope that the supply will reach everywhere on time.” Due to lockdown, the hands of farmers and APMC are tied up, so we import raw materials from Saurashtra and North Gujarat”.

As a part of the government’s announcement to provide pulses and rations for three consecutive months due to the lockdown caused by Corona, Mahavir Impex is working to send pulses from Gujarat.

A massive operation for transport and milling of pulses is underway in the country to distribute one kilogram of pulses to about twenty crore households for three months under the Prime Minister Garib Kalyan Anna Yojana.

This operation entails lifting of un-milled pulses from the godowns, getting the pulses cleaned and then reaching them to the states for distribution.

Several States and Union Territories would be able to distribute pulses for all three months in the first go itself. For the remaining states, the efforts are being made to complete the distribution for all three months within May itself, preferably within third week of May. This operation will involve about two lakh truck trips and loading and unloading operation over a period of four weeks.

The  distribution of pulses is  intended  to meet the protein needs of people during this hour of crisis due to COVID-19 lockdown. Over 100 Dal mills across the country have been pressed into service so far. The States and Union Territories have taken one-third of the monthly requirement of pulses to final destinations for distribution.

Some States and UTs have decided to distribute pulses along with food grains distribution in the first week of May for reasons of social distancing and public safety.