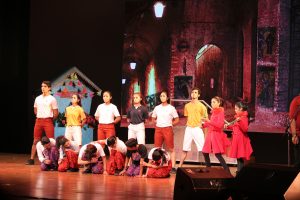 ‘Queen of Rock’ – the Rock music play staged at Kamani Auditorium, Delhi on the 30th November, 1st December and, 2nd December 2018 by CAPED and AZAD Foundation received great acclamation. ‘Theatre for a Cause’ – this edition of the fundraising project of CAPED and AZAD Foundation was a great show altogether and the audience was left mesmerized after witnessing such amazing performances from the artists. The fund raised from the musical play will add to funds for cervical cancer awareness and non-traditional ‘livelihoods with dignity’ for women.
The fluid and interesting storyline of the players talked about a group of Bohemians who struggled their way to build up an environment where people can exchange their thoughts freely, play live music and start new fashion trends in the era of uniformity. It was a skillfully plotted musical act which showed the transformation of the real world into a virtual world brilliantly. It conveyed that people are currently living in a world where everyone is the same- they think the same, act the same and dress the same. The rock music based musical act with songs from Freddie Mercury in his signature four-octave vocal range was a true bliss for spectators. The colorful performance directed by the brilliant director Ritu Rae Chandra was especially targeted for music lovers as an ode to the British rock band ‘Queen’. The event was a visual spectacle to everyone present in the audience and it left them spell bounded, wanting for more. 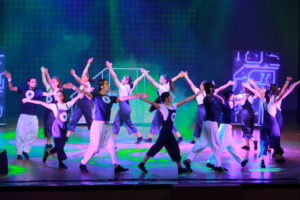 The funds received from the fundraiser project – ‘Theatre for a Cause’ will be used by CAPED to carry out screening camps for women to test and monitor cervical cancer and reach out to close to 2000 women monthly. AZAD foundation will use the funds to enable more women from the marginalized segment of the society to take charge of their lives and provide them a better life as empowered professional chauffeurs. In the past 1 year, in partnership with Sakha, AZAD had enabled 147 women to join a pool of 650+ professional chauffeurs earning remunerative salaries and claiming a space of their own in the transport sector. AZAD has tried to build an enabled ecosystem for women through various programs like PARVAZ, AZAD KISHORI PROGRAM, and WOMEN ON WHEELS.
It was a great sight to see the association of two of the biggest NGOs working for the betterment of women in the country today coming ahead and taking this opportunity to promote self-awareness among the women.
Excited about the play, Ms. Mridu Gupta, COO, CAPED (Cancer Awareness, Prevention, and Early Detection) Trust says, “We have chosen to create awareness among masses about women-related cancers with a specific focus on cervical cancer. Our mission is to identify and create different areas to spread awareness and knowledge among women and try to help unprivileged women who are suffering from cancer with their treatment. Our aim is to screen 10,000+ women for cervical cancer.” 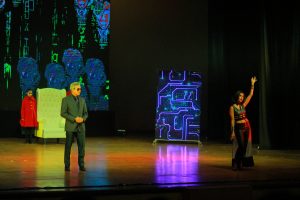 Delighted after the event, Mr. Shrinivas Rao, COO, Azad Foundation says, “Our aim is to guide the women struggling for survival towards self-empowerment. We are trying to aid them by providing skill training so they can lead to a self-sustained life. We are committed to breaking patriarchal boundaries and structures so that we can construct a safe and supportive space for their development. We are trying to build an ecosystem where poor women can learn and become independent to gain remunerative ‘livelihoods with dignity.”
About CAPED:
A Trust registered in the year 2014 under the Indian Trust Act, CAPED – Cancer Awareness, Prevention, and Early Detection, as the name suggests, is a platform established for the dissemination of information and awareness creation about the latest developments in the field of cancer.
CAPED – Cancer Awareness, Prevention and Early Detection Trust have chosen the cause of women-related cancers with a focus on cervical cancer. Our mission is to identify and create different areas to spread awareness and knowledge among women and empower them to take action regarding their own health.