After the grand success of its partnership with Super Singer Junior in Tamil Nadu, Helo, India&#39;s leading regional language social media platform, today announced its unique partnership with Bigg Boss Kannada (BBK)
Season 6, for the Karnataka market. This partnership marks the first time BBK has partnered with a social media platform to engage their audience and is a testament to Helo’s ongoing commitment to bringing regional audiences closer to their favourite reality television shows. Known as one of the country’s most popular reality shows, Bigg Boss runs for a hundred days, starting off with 20 ordinary people who need to finish 15 rounds of tasks, leaving one survivor at the end of the season. Over the past few years, the show has diversified into a total of seven different languages across India. These languages include Hindi, Marathi, Bengali, Tamil, Telugu, Kannada and Malayalam. The Kannada edition premiered on 21 October 2018 and as of 8 January, the remaining BBK contestants include Akshatha Pandavapura, Andrew Jayapaul, Dhanraj C.M, Kavitha Gowda, MJ Rakesh, Naveen Sajju, RJ Rapid Rashmi and Shashi Kumar. The show is hosted by Sudeep Sanjeev. 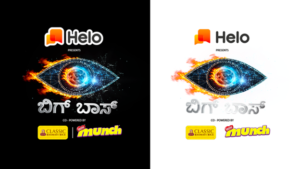 Helo users can now engage with their favourite BBK contestants by following the trending hashtags #ಬಿಗ್ ಬಾಸ್ಚಾ ಲೆಂಜ್� as well as the contestants’ personal accounts Through the hashtag #ಬಿಗ್ ಬಾಸ್ ಚಾಲೆಂಜ್�� Helo users can select tasks for the contestants chosen by BBK to follow users’ requests. On January 12 and 19, four lucky Helo users will get a chance to visit the shooting locations for a live interactive session. Meanwhile, Helo will also start daily hashtags and challenges to continue conversations around the show. All eight contestants will engage with their fans exclusively only on Helo during BBK.

“We’re excited to partner with Bigg Boss Kannada to further engage and excite our Kannada user base, which is one of our fastest-growing communities on the platform,”said Shyamanga Barooah, Head of Operations, Helo. “In line with our ongoing commitment to enable Indians to better express themselves, we are looking forward to giving an opportunity to BBK fans from all over the state a chance not only to follow, but also participate in the show in their own language.”
Helo is currently available in India in 14 vernacular languages, including Hindi, Telugu, Tamil, Malayalam, Kannada and more. Kannada is one of the more popular languages for the app which enables users to make new friends, share jokes, tweets, memes, WhatsApp status updates, wishes, quotes, shayari and stay informed with the latest trending news and views of the day. Powered by Artificial Intelligence technology and robust analytics, Helo offers relevant
content recommendations that are customised as per every user&#39;s content consumption preferences and patterns. With its easy-to-use interface, Helo also offers content in a more compelling, visually immersive way. All of the content on Helo is uploaded and created by users, leveraging the app’s embedded tool that allows users to upload and edit photos &amp; videos seamlessly.