Gaurav and Ritu Taneja, the duo behind the #1 YouTube vlogging channel Flying Beast have commenced a touching initiative ‘#Rasbhari Chai’ named after their daughter to give back to society in their own way. 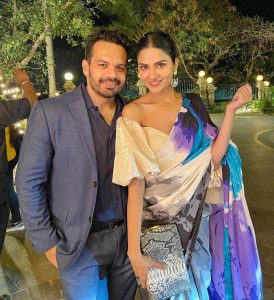 Parents to their 2 year old, both Gaurav & Ritu understand the kind of money that goes into educating and bringing up a kid with pay as minimal as can be for the monetarily less fortunate families.  An idea that came to them from calling fans to meet them on their recent trip to Tripura, is now warming hearts and changing lives slowly but most certainly.
Gaurav & Ritu visited Tripura on an invitation by the Hon’ CM of the Tripura Mr. Biplab Kumar Deb to promote tourism and discuss other key subjects their passionate about. Finding themselves in the perfect opportunity, the couple decided to launch their brain child ‘#RasbhariChai’ amidst fans and followers in Tripura. With a notice of less than 15 hours, almost a 1000 people turned up to support a cause they’d never heard of.
The idea of Rasbhari Chai is to invite people to buy tea for a minimum of Rs 20, which could go up to any amount the person wishes to pay for it in exchange for a picture (selfie) with Gaurav and Ritu. The amount raised will go straight to the tea vendor’s family as a fixed deposit amount in the name of the girl child of the family. To kickstart the cause, Gaurav and Ritu asked their social media followers to show up at a venue in Tripura and were able to raise a good amount within 4 hours of taking pictures and selling tea just to help out the man who sells happiness in a cup every single day.They multiplied the amount and gave a total of Rs. 51,000/-for his daughter’s welfare The man was left in tears and failed to express how he truly felt.
Speaking on why #RashbhariChai Ritu said, “We always wanted to give back to the society in our own way. Since Gaurav is a chai lover, a fact popularly known by his fans, we wanted to help the men who make and sell chai on a daily basis. With the support of Honorable CM of Tripura, we launched the initiative amidst all our lovely fans. Our plan is to undertake this across the country and help many more ‘chaiwala’ who so tirelessly make our days better with their chai”.