IQRA: Kondotty Sufifest 2019 – a celebration of the region’s culture through music, art, poetry, and discourses

Thakkiya Foundation for culture and development is conducting IQRA: Kondotty Sufifest 2019 on 16th and 17th November 2019 at Qubba Premises, Near Calicut Airport. This two-day long festival spread across Kondotty and its surroundings will be a celebration of the region’s culture. Storytellers will weave spellbinding tales, poets will recite verses with eminent musicians and will unleash spiritual raptures through zestful sounds and rhythm. The event has been curated by critically acclaimed multi-media artist and sculptor Riyas Komu.

The Sufi Festival will celebrate the spirit of togetherness that runs through our past and present, life and dreams. It will be a site for people of all ages, abilities, faiths, ethnicities, gender identities and ideologies to imbibe the ecstatic expositions by practicing Sufis and a variety of artists. A bazaar of traditional artefacts and handicrafts and food and beverages from across the Malabar Region will also be part of the festivities. 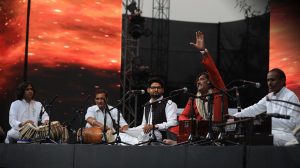 Procession with Muttum Viliyum from Kalothu Thakkiya to Kondotty Thakkiya, Sufi Music performance by Mukthiyar Ali (Rajasthan), Music Performance – by John Nelson, (Ireland), Sopanasangeetham by Njaralath Harigovindan, Boon Mein Samoond (Ocean in a Drop) – a concert by Shabnam Virmani & Swagath Sivakumar, Music Performance by Vedanth Bharathwaj, Rashmi Satheesh, and Olam Band, Mahakavi by Hussain Randathani and Thaayambaka by Padmashri Kuttan Maarar are the key highlights of the festival. Rag Razaq will be honoured with the “Thakkiya Puraskaaram 2019”. There will be live streaming of IQRA – Quran recital by Yasin – Ismail Kosar.

Professor Ilias (Kondotty’s Historicity), S. Gopalakrishnan (Music), Hashim (Sufism), C Hamsa (Sufism), Resul Pookutty (Oli) and Anita Thampi (Philosophy of Waste) will be the key speakers. Sculptural Installation by Jigesh Kumar, Ponnani Series Photography Exhibition by K R Sunil, Small Scale Societies Video Installation by Vipin Vijay, Graffiti by Abid Sheikh and Mohammad Irshad, Kondotty by Biju Ibrahim (Photography), Graphic Art by Lathish Laxman, Alang by Madhu Kapparath (Photography) and Painting by Anitha T K is also part of the festival.
Kondotty is a fascinating site of historic memory; arrivals through the sea and across the land were always integral to the flourishing of the local economy, arts, and culture. Spiritual explorations and expressions crisscrossed and blossomed from time immemorial, while its history is also one that is scarred by colonial invasions and communal strife. Through the ebb and tide of time, Kondotty has remained as a site of healing, reflection, and spiritual exuberance.
Kondotty spawns illuminating community narratives and testimonials of karamat or divine powers of its blessed, saintly figures. The tales of their trans-temporal and trans-spatial presence and barakat live through their makbaras or shrines, malas or hagiographical writing and ritual veneration.

The famous Kondotty Nercha, the annual ritualistic festival of celebration and healing, held at Mohammed Shah Thangal’s Qubba is part of the region’s civilizational memory. The festive gathering of IQRA: hopes to express and address people’s yearning for spiritual reconciliation and refinement in changing contexts and situations. An invocation to remember that draws upon the age-old devotional practices of the Sufis, IQRA celebrates the mystical legacies and magnificent traditions of Sufi culture in the Malabar region.

True to Kondotty’s transformative spirit, IQRA: Sufi Fest will ignite and illuminate togetherness in multiplicity through soul-stirring music, mystical poetry recitations and illuminating discourses on philosophy, art and the esoteric wisdom of one of the oldest living and most cosmopolitan of mystical traditions in the world.