Welcome to the ‘Your Story’ Column!

Are you among one of the youth most likely of age between 22 – 26 , whose dreams are path past somebody’s imagination. If yes, then ,You can relate with this story very well.

Gone are the days when the young generation were more focused about having a girlfriends and boyfriends ,rather they are increasingly engaged about their profession , their future and their reasoning.

But , Sometimes your capabilities are always questioned by everyone, for the most part your folks. Indeed, Your Parents!

Guardians has a significant impact in a child’s advancement and without a doubt they generally think good for their kids. In any case, Do you additionally believe that some place in your life on the off chance that you work or move as indicated by yourself ,rather than your guardians choice , You can develop yourself progressively more higher and win more , earn more and above all You will be increasingly more joyful. Is this wrong to state that!

Let read the story below, You can give your reviews in the comment section.

There was a girl , highly motivated and serious about her dreams. She never wanted to live a middle class life , though she was born in one. That’s not her fault, Obviously! She has faith in the statement by Bill gates – “If you are born poor it’s not your mistake, but if you die poor it’s your mistake“

She wanted to be a business women! oh damn! how can a girl think of such profession? Is this the inquiry that came in your mind when you read the first line?

When the girl was in second year of her college she aimed to earn money in order to handle her expense instead of asking money from her parents. She started something that transformed her life, She even started earning. By the end of her college, She was earning a decent sum.

Yet, She is a girl. How can she work on something that is making her earn however It’s  not a Job! Everyone in her family was glad to see that she is earning but, simultaneously they were despondent in light of the fact that she is not doing a Job! 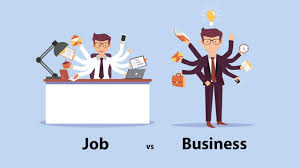 Alright! Along these lines,  If a girl is earning , but It isn’t from occupation, yet is from her diligent work on online gateways and web based life. Won’t any family acknowledge her as a daughter in law? Or on the other hand as her family who were happy with her earning but, when the college ends asked her to get a new line of work (Job) and calls her that hard work as a part time is right?

My question to everyone here is that why the school, universities and guardians don’t encourage the kids to be a business person rather they have an attitude that the children should buckle down , study hard and get a brilliant package in an organization Why?

Having a thought of being own boss is wrong? Aren’t they catching a tyke’s mind and making it bound not to think beyond job?

“If you will keep cash and a banana in front of a monkey, He will consistently pick a banana since he doesn’t realize that If he will pick up the cash he can purchase more banana’s . Comparative goes with a child , If you wont enable a child to prepare to stun the world , He won’t be able to leave the nutshell”.

This will be the best gift to them..

20 Sweet Reasons Why Cats Are Good For Home