Urvashi Dance Music Art and Cultural Society organized a unique creation and presentation “Kaal Shakti” on 8th March 2020 at Kamani Auditorium as a salute to the spirit of women. The unique dance, drama ballet presentation put forth the programs which symbolized the powers of Shiva in form of its incarnations of Stree Shakti as Sita, Draupadi or Ahillya, Urmila in form of mother, sister, daughter in different ages. 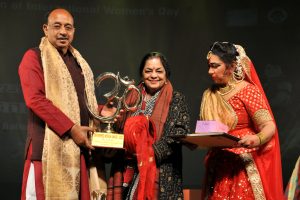 Shri Vijay Goel, Former Minister of State for Sports and Youth Affairs was the chief guest and inaugurated the event by lamp lighting session. The event was conceptualized under the leadership of Kathak exponent and social activist Dr Rekha Mehra also the President of Urvashi Dance, Music, Art and Cultural Society. The event started with a small workshop by Dr Anju Sharma, a Psychiatrist, Sound & Energy Master. This was followed by a 15 minutes long performance by Sound Of Infinity, Asia’s first healing band founded by Dr Anju Sharma. With the on-going tension in the world, the sound healing therapy using a different aspect of music helped the audience relive of the stress, anxiety and depression. 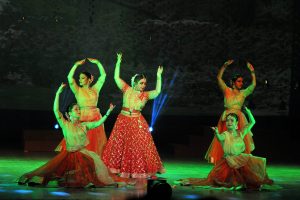 The evening continued with the Kaal Shakti performance that showed an aspect of Shiva – Kaal Shakti where Shiva and Shakti complete each other. The performance depicted a scene of a Yajna where Daksha invites all the gods and kings of the world, except Lord Shiva. When Daksha’s youngest daughter Sati goes for the yajna, he repeatedly snubbed her and also insulted her husband Shiva in front of all the dignitaries. He continued shouting repugnant words against Shiva. Sati felt deep remorse for not listening to her beloved husband. Sati was unaware of her power all these while, but after the bearless humiliation of her husband, she realizes her power and cursed Daksha for acting so awfully towards her husband and then Sati committed suicide by jumping into the sacrificial fire. The performance-related the situation with that of today’s scenario where some women feel vulnerable and live in fear. Various other aspects of the life where women suffer like early marriage, marriage without consent, denied education etc were shown. They ended the performance with a Tarana that spread the message to those women that they are strong enough to live an equal life and can raise their voice against all the injustice happening around. Dr Rekha Mehra performed the role of Sati. 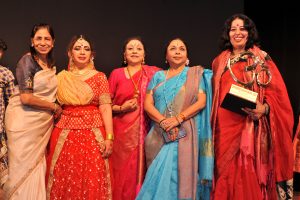 Being organized on the day of International Women’s Day, the event honored 21 eminent female personalities who have empowered the society at large and symbolizes the creative powers of the universe.

Dr Rekha Mehra adds, “Today, women are not vulnerable, they should come out in open and show their strength. This presentation is a dedication to the empowered forms of females and aims to pay tribute to these strong women who embody the female strength of Shiv, within them.”

Shri Vijay Goel, Former Minister of State for Sports and Youth Affairs, said, “I respect and salute all the women who take up all the responsibilities on their shoulder and take the home and the world forward.” He humorously adds, “Without them, nothing moves forward and one of the reasons is that they have stopped going to their maternal house. Males should get to hold the fort at home in women’s absence and they will get to know how much women work from dawn to dusk.”