Karbonn Mobiles, one of the leading Indian mobile brands offering a wide range of cell phones to complement the evolving communication needs of the Indian consumer, is celebrating the success of its model K9 becoming India’s longest running model in the feature phone category. Originally priced at INR 1700 at the time of its launch in 2011, K9 was focused at equipping the customers with a robust phone that would cater to their communication needs under typical Indian conditions. Today, K9 has become one of the most popular and the longest running phone models in the market. 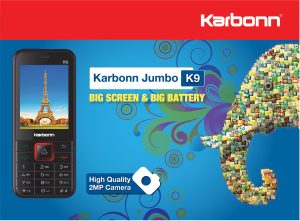 Karbonn K9 has sold 25 Million units till date and is being manufactured in India since March 2016 as a part of the company’s Make in India initiative. The successful running of Karbonn Jumbo K9 for the past 9 years has made Karbonn a brand that is trusted by the Indian Market in an impeccable manner. Currently priced at INR 1200 only, the new avatar of K9 comes loaded with value added services transforming the  feature phone into a power packed multi – media phone. Some of the other features include big display, powerful speaker, 2 MP rear camera, Dual SIM, 16 GB Expandable Memory and a powerful 1800mAh battery.

Pardeep Jain, Managing Director, Karbonn Mobiles said, “Karbonn K9 has been serving the people of our nation for almost a decade now. Being one of the longest running models in the Karbonn portfolio, K9 is still very much in huge demand and moving with a fast pace due to its cutting-edge features, ease of use, value-for-money and cost-effective pricing. According to a TRAI Report around 30-35% of the people in India still do not own a mobile phone and 40% of the remaining own a feature phone. Our vision is not only to ‘Make in India’ but also create products ‘Made for India’. Karbonn has been serving India with the best of customized phones for the past 10 years and wishes to keep the journey going.”

Karbonn is one of India’s leading mobile brands with a portfolio of feature rich mobile devices at disruptive price points. With over 92% penetration in India Market, 15+ E-Commerce Partners, 17+ Modern Retail Partners and a network of 870 Service Centers, Karbonn aims to further its vision of providing devices that combine best-in-class features, latest technology and finest mobile services.

Karbonn Mobiles is one of the leading Indian Mobile brand which has been serving India for over a decade now. The Brand offers a range of user centric devices to complement the evolving communication needs of a modern consumer. Committed to simplifying technology, Karbonn has made inroads in the market with a combination of affordable yet innovative devices. Karbonn has over 85,000+ retail partners and 850+ service centers across India to ensure effective after sales support to its growing consumer base.

3 days agoedward robinson0
All
All

5 days agoedward robinson0
All
All

How To Lose Weight On The Treadmill?

5 days agoedward robinson0
All
All

7 days agoedward robinson0
All
All