Award winning Ad Films director, Writer and Producer Sonu Tyagi is all set to make his foray in bollywood with an Untitled Film to be produced by Films Productions and Celebrity Management Company, Approach Entertainment. The film is in Pre production stage right now and will be going on floor soon.The film will be produced under the banner of Approach Entertainment. The film will be its first Bollywood project under its own banner.

Sonu Tyagi is a noted writer, advertising films director and producer based in Mumbai. He has been associated with bollywood in various capacities in production, creative, direction, marketing and line productions.Sonu Tyagi did courses in Journalism, Advertising Management and Film Making after graduation in Psychology and found his own company at a very young age. Before venturing out in the Film world, he had stints with top advertising agencies in India as copywriter and account executive. He has been writing and directing Advertising Films for last 6 years. 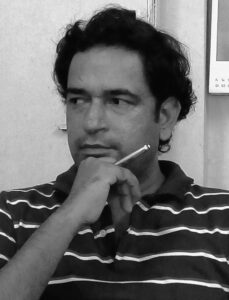 Sonu Tyagi also bagged “The Bizz India 2010 Award” given by World Confederation of Business. He has already produced and directed numerous advertising films and music videos . Sonu Tyagi has been working as executive producer in bollywood and have line produced International Ad films and few hollywood films in India. He has also written novels and one of his next novel on One Sided Love will be launched next month. He has been associated with over 40 bollywood films in Writing, Direction, Line Productions and Marketing.

Talking about the Film and his bollywood debut, Sonu Tyagi said “We will be focusing on the script and will give it ample time so that we can plan things in a better way. The film will be set in Western Uttar Pradesh and will be revolving around a gangster. We are already in touch with few popular actors in bollywood who are keen on the project but we have not finalized the casting yet. As soon as the script part is over, we will start working on the casting and other things. Our script will be the hero of the film and it will be emotional drama revolving around a gangster based in Western Uttar Pradesh”.

The Fast growing Celebrity Management and Films Productions Company in India will also work on New Shows development for TV Channels focusing on its Celebrity Management base and the talents roster of the company. Approach Entertainment is planning to be the top Line Productions Company in India in next two years. The films productions company is in talks with the top Directors of Bollywood, Cinematographers, Writers, Art Directors, Actors to offer complete integrated line productions services for different genre of film making. The production house has already brought few very talented young film makers on board. Two young Ad Films Directors and Creative Consultant are already on board.