As he steps on the field to play his 4th World Cup, SEVEN, a global sportswear brand headquartered in India offering fitness and active lifestyle products is unveiling  special limited editionYour Grace T-shirts as a mark of respect and admiration for one of the greatest masterminds of Indian Cricket MS Dhoni who captained the Indian team to World Cup glory in 2011 and 2007. SEVEN is an Indian fitness and active lifestyle sportswear brand under the banner of Rhiti Group which has evolved as India’s fastest growing conglomerate pioneering in sports and entertainment poised to be a leader in the industry. SEVEN is also the official apparel partner for Chennai Super Kings. 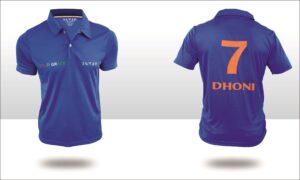 Besides showing their admiration and respect for the cricketing legend by wearing the Your Grace T-shirts,  fans can also get to meet MS Dhoni himself by sharing their pictures wearing the Your Grace T-shirt online. The limited-edition T-shirts will be available on the SEVEN website www.7.life. SEVEN is present across retail stores in India and globally in USA, Canada, South Africa, UK, Mauritius and neighboring countries in the subcontinent as well as on online platforms like Flipkart, Amazon, Jabong and Myntra.

According to Lokesh Mishra, COO, Rhiti Group, “ We at SEVEN cherish the opportunity to extend our best wishes and gratitude to MS Dhoni for all the cricketing glory he has brought to India and all fans of cricket with the launch of the Your Grace special edition T-shirt. Through our global reach, we hope that fans of the game across the world can get a chance to extend their wishes to MS Dhoni. Just like MS Dhoni, each SEVEN product is a perfect blend of quality, affordability, style and comfort across various fitness categories, apparel and accessories for both men and women.”

Mr. Arun Pandey, CMD and Chairman, Rhiti Group on said, “In 2011, MS Dhoni led India to a thrilling win in the final of the World Cup at Wankhede Stadium in Mumbai with a humongous six off Sri Lanka pacer Nuwan Kulasekara. Eight years later, on the threshold of another World Cup, as fans of Indian cricket, our love and appreciation for the only cricketer in the world to have won the all ICC trophies, Mahendra Singh Dhoni remains unchanged.”

The brand SEVEN was launched as a lifestyle brand in 2016, with plans to manufacture and market sportswear; both clothing and footwear. The brand is also looking at further investing in research and development of its product portfolio to deliver the best to its customers.