THE THIRD DAY OF YOUTH FESTIVAL SEES THE PERFECT BLEND OF DANCE, MUSIC AND DRAMA

The 3rd day of the Youth Festival was celebrated with a full audience on December 3, 2019. The 9th edition of the festival organized by Sahitya Kala Parishad and the Department of Art, Culture, and Languages, Delhi Government will continue until December 6, 2019 at Central Park, Rajiv Chowk. 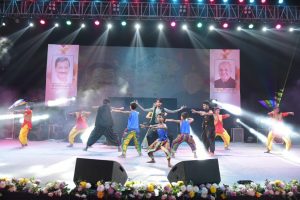 The third day of the festival was opened with Pakhawaj ensemble by the disciples of Fateh Singh Gangani. They started their performance with Ganesh Paran followed by Chakradhar Paran. Later, the disciples of Dr Deepti Omcherry Bhalla, with the stage name Trikalla Gurukulam presented Mohiniattam. Their first item was ‘Karatalam’ which is an invocatory dance in praise of Lord Ganesha, set to Ragam Saurashtra and Talam Chempada. This was followed by ‘Adi Keshava Nritya Prabandham’, a Sanskrit composition set to Ragam Thukka and Talam Chempada in praise of Lord Vishnu, the slayer of Keshi who reclines on the serpent bed, residing in the temple surrounded by the “sree chakra” river with eyes closed holding the lotus, chakra and gadha. 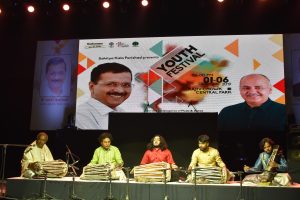 The evening continued with a street play presented by Common People group. The artists presented 3 acts which include women safety, Swach Bharat Abhiyan and the last performance was dedicated to Mahatma Gandhi Ji and his philosophies. The first act depicted today’s scenario on how unsafe is a woman and how Government is taking steps to protect and keep it safe for these women. This was followed by the cleanliness drive that the Government has taken. Their ended with an act on mob lynching. The last act depicts how Gandhi Ji three philosophies – ‘Bura Mat Dekho, Bura Mat Bolo, Bura Mat Suno’ is completely forgotten in today’s time. The artists passed on the message of non-violence to make this earth a place to live in. As the show proceeded, the disciples of Sachin Rai performed a contemporary dance followed by folk dance by Subhash Nagara and group. The group performed the Haryana folk dances like Ghoomer Of Haryana, Chunar Dance, Dhamal Dance and other Haryana Folk Dance. The evening came to an end on a high note with a band performance by Surtheka that performed classical fusion with pop. 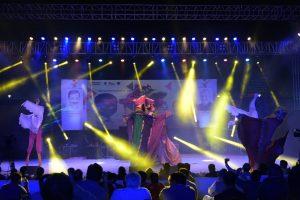 The Youth Festival has a Fine Art Section with the name Kala Mela. They will set up a platform for upcoming artists by conducting on the spot painting competition that will be held on 4th & 5th December 2019. The platform will put the limelight on those young artists who are upcoming and their talents are untapped. This year the subject is ‘Delhi- Through the eyes of youth artists’. The competition will be held from 2 pm to 5 pm. The winners will be honoured with cash prize and the selected art piece will be exhibited on the last of the festival during the Art Exhibition.