World architecture Travel, as space for celebrating the exploration in the fields of design, art and culture, conceived by a passionate bunch of people led by Ar. BrijeshShaijal and Ar. Jayakrishnan KB. The WATconnect series is an endeavor of World Architecture Travel that embodies the layers of art and architecture to traverse in the architectural the fabric of cities in India through architecturally curated trips. As an incredibly strong step to initiate a dialogue on the contemporary practices across India, WATconnect Series is an attempt to explore and compile the post-independent architectural scenario with a significant focus on how it reacts to different cultures, people and climate in the evolution of India.

WATconnect X Bangalore was curated by Ar. Bijoy Ramachandran and SunithaKondur; Principal architects of Hundred Hands, Bangalore, assisted by Ar Amrita Vinod and Ar. Mazin Yahiya from WAT. WATconnect x Bangalore took the team through the minds behind the growing architectural developments to share and brainstorm ideas about design, art and architecture. 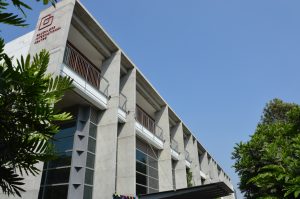 The visit to Keremane, the housing project by architect NavnathKanade followed by a bounteous talk by the architect himself was an exceptional kick-off to WATconnect x Bangalore. Indian Institute of Management Bangalore designed by the master Architect B.V Doshi initiated dialogues, blurring the boundaries between built and unbuilt. Resourceful discussions at architecture offices created a closer discussion on the architecture practices across the city. Offices of architects Vijay and Dimple from MayaPraxis, HundredHands, Ar. PremChandravarkar from CnT Architects, Ar. ChithraVishwamnath from Biome and Ar. ManojLadhad, Sandeep J ,Senthil Kumar of Architecture Paradigm were connected in WATconnect X Banglore travel.

WAT team visited Cinnamon, by Nisha and Sumithro Gosh, Nivana films building by Ar. ShimulKadri, Titan Corporation building done by Ar. Sanjay Mohe, Windmills of the Minds by Ar. Kamal Sagar, Bangalore International Centre by Bijoy Ramachandran and SunithaKondur, and Poddar house by Ar Rajesh Ranganathan. The trip also included a visit to the showroom and Factory of our Sponsor, Stanley. WATconnect x Bangalore gleamed in its immense zest and zeal and was celebrated with a conclusion at BhogaNandeeshwara temple, the prominent ethos of Bangalore. The Next edition, WATconnect X Hyderabad will be hosted by the end of March 2020.