Sign In / Register
Home » What Is The Medical-Grade Red Light Therapy Device: The Ultimate Guide
Health

Among all tumult of voices that claim their own brand and devices as the best, you should be stumbled about how to make a choice of purchase. To know what the medical-grade therapeutic effect brought by red light therapy is, we should know how red light therapy works on our body and the genesis of low-level light therapy so that we can truly determine what makes red light therapy effective for medical-degree treatment.

The first discovery of low-level light therapy emerged accidentally from a laser surgery trial, as detailed in this medical study. In the late 1960s, when scientists investigated the question of whether the laser effect on the body would cause carcinogenetic changes, they found that some benefits of laser surgery came from the effects of low-level light in the peripheral area of the laser-irradiated region, such as reduced inflammation, less postoperative pain, and better wound healing. This implies that the beneficial photoactivation processes brought by light therapy directly come from light energy, with a nominal relation to what kind of light source you choose.

It was not until the end of the 1990s that LED technology was able to realize the phototherapy effect. Before, the light from LED sources was too divergent, with low and unstable output powers and a wide waveband. At that time, it was more or less impossible to manufacture LED sources at specific nominal wavelengths, which could only be achieved by the HeNe laser.

Things changed when the NASA Space Medicine Laboratory developed a new generation of LEDs that can produce a useful phototherapy source with less divergence, much higher and more stable output powers, and quasimonochromaticity whereby nearly all of the photons are at the rated wavelength. This new generation of LEDs also had its own phenomenon related to photon intensity, named photon interference, whereby intersecting beams of LED energy from individual LEDs produced photon interference, increasing the photon intensity dramatically and thus offering much higher photon intensities than the older generation. The higher photon intensity was actually observed beneath the surface of the target tissue when applying LED therapy at visible red and near-infrared wavelengths because of the interaction between the photon interference phenomena and the tissue scattering properties of light at these wavebands. This is an article on the determination of the optical properties of quasimonochromatic LEDs.

For decades, the speed of LED technology development has been accelerating as the need for realistic lighting designs grows. But LEDs are far more difficult to model than traditional light sources, and the problem is worsened because of the variety of LED radiation patterns. There is a study that analyzes the model development of LED sources.

A medical-grade LLLT device was developed that could provide stronger treatment doses than previous models. These devices are now available in both clinical settings and at home, making them more accessible to consumers. Because these devices emit low levels of light energy, they don’t cause headaches or eyestrain like higher-powered lamps do, making them a great option for patients with chronic conditions!

Although photon absorption, intracellular signal transduction, and the final cellular photoresponse are all three stages of the same photobiostimulation process induced in target cells by red and near-infrared light energy, it should be noted that both wavebands have different primary targets and photoreactions in cells. Visible red light is primarily a photochemical reaction that acts on cytochrome-c oxidase, the last enzyme in the cellular mitochondrial respiratory chain, and is primarily in charge of inducing the synthesis of adenosine triphosphate (ATP), the metabolic fuel for all cells. On the other hand, near-infrared light targets the cellular membrane transport mechanisms, and thus Na+ and K+ pumps can be activated, which leads to the same photochemical cascade as seen with visible red light. The picture below illustrates how red and near-infrared light work and their biological interactions with tissues. 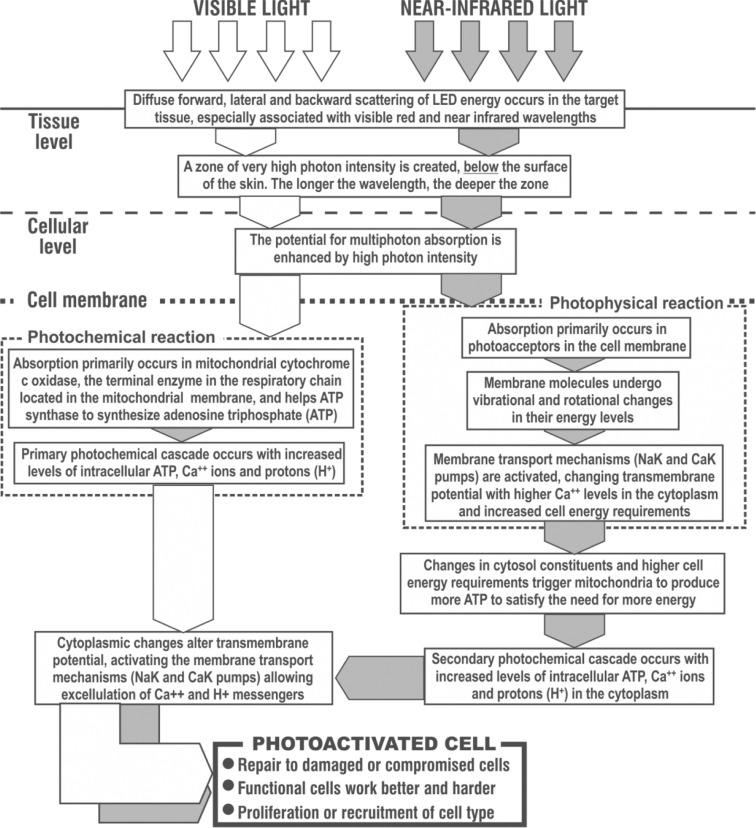 The factors behind LED phototherapy: the most important criteria

Based on the published research, LED phototherapy is proving to have more and more viable applications in medical field; however, it should be pretty aware that not any LED can achieve medical effects. In general, LED phototherapy must satisfy the three criteria below.

1) The LED system must have effective wavelengths for the target cells or chromophores. Currently, the published research strongly recommends 830 nm for all aspects of wound healing, pain reduction, anti-inflammatory treatment, and skin rejuvenation, with a combination of 633 nm for light-only treatment of active inflammatory acne vulgaris.

2) The photon intensity, i.e., spectral irradiance or power density (W/cm^2), must be adequate, or once again the absorption of the photons will not be sufficient to achieve the desired therapeutic effect, because it requires a certain intensity to penetrate into target tissues; whereas if the intensity is too high, the photon energy will be transformed into excessive heat in the target tissue. Heat will not produce a therapeutic effect but will cause protein denaturation, degradation, and coagulation if it exceeds a certain threshold.

3) The dose or fluence must be adequate as well (J/cm^2), but if the power density is too low, then extending the irradiation time will not achieve the desired result.

What is the medical-grade red light therapy device? Bestqool’s answer

A medical-grade device ensures the effectiveness of medical treatment

With the advanced LED manufacturing technology, Bestqool products are able to deliver the most effective wavelengths in the optical window of the skin, i.e., red light at 660 nm and near-infrared light at 830 nm, with high stable irradiation output and power density.

A medical-grade device ensures the efficacy of light therapy 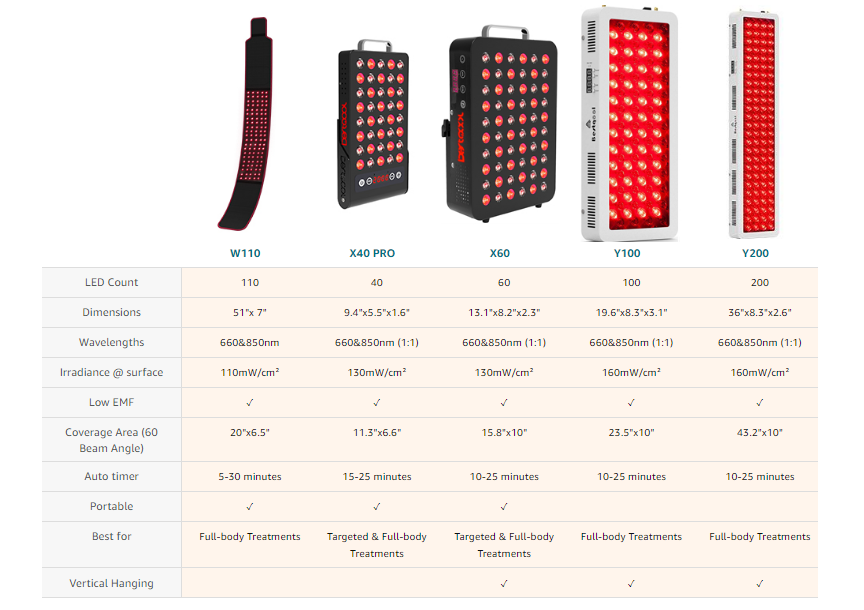 Choosing a high-quality device that is FDA-registered is very important because the supervision and inspection by the authoritative bodies ensure the claims of medical device companies are truly trustworthy. The supervising authority examines the claims of the products before they’re allowed to be put into commercial activities. All Bestqool products are FDA-registered and ETL-certified, and it is worth noting that with the advanced EMFs-shielding technology, Bestqool products have no EMFs emitting from 3 inches, which is the safest standard for electrical devices on the market.

A good manufacturer will take responsibility for their products, and all Bestqool products have a three-year warranty, which is the longest in this market, so you can trust us.

Things To Do To Stay Active In Winters

Main differences between diet and fasting

Try Serving a Ginger Pomegranate Mocktail for Entertaining in January